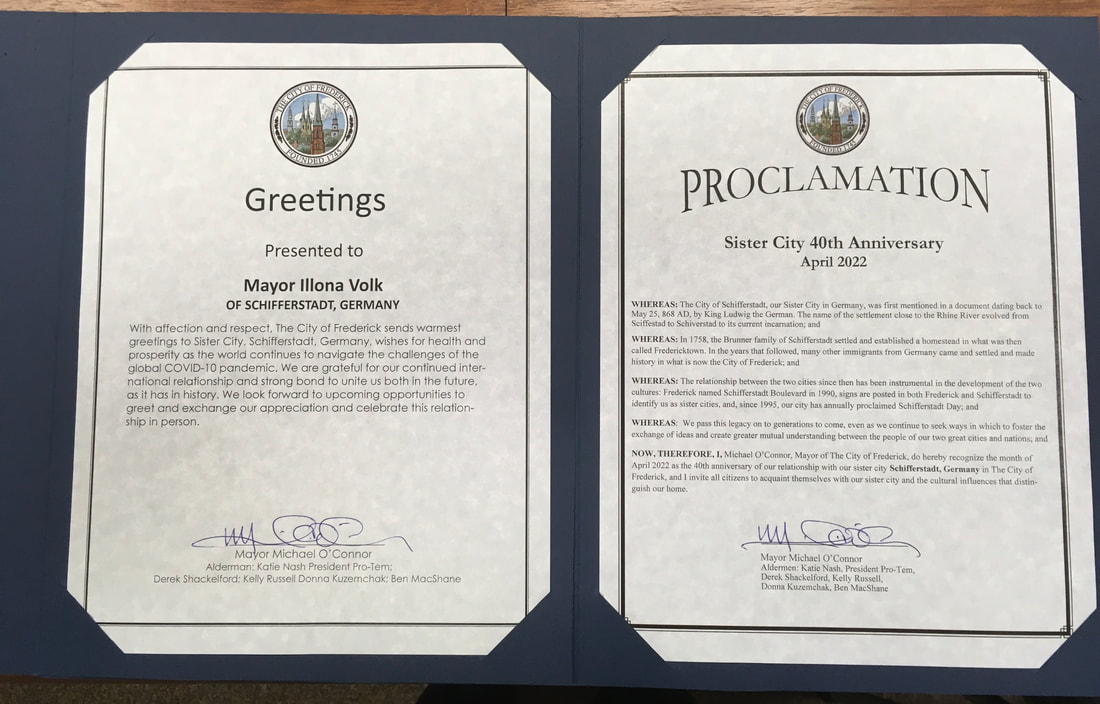 FSCA garners mentions in local publications
Although COVID-19 and dwindling FSCA membership combined punches to knock out the FSCA's activities this past year, you will be happy to learn that, thanks to the enthusiasm of long-time FSCA member and booster Ronnie Osterman, we have started taking steps to become active once again in 2022 (see Upcoming Events page). In the meantime, due to Ronnie's efforts, we garnered mentions this year in two local publications: The Frederick News-Post and Frederick magazine:

City Awards Grant to FSCA
The FSCA is pleased to announce that we are the recipient of a City of Frederick Community Promotion Grant. The City’s website states that “The Community Promotion Grant program awards funding to nonprofit charitable or civic organizations in order to supplement existing funds that either create or enhance services that positively impact the greatest number of City residents.”

When we submitted our application at the end of 2019, the City was busily engaged in planning and coordinating events to celebrate its 275th Anniversary throughout 2020. In applying for the grant, we indicated that we would use the requested funds to help pay for our monthly operating expenses, thus freeing up funds that we could put to better use to further our Sister Cities activities in conjunction with the City’s anniversary celebration.

Even in the best of times, the FSCA’s income from our membership fees and fundraising activities is unpredictable. Now, with COVID-19 halting or postponing not only the City’s anniversary events, but also our regular fundraising activities, we are gratified that the City values our mission to facilitate mutually beneficial and enriching relationships between Frederick's citizens, schools, civic and social clubs, and other organizations and their counterparts in our Sister Cities, Mörzheim and Schifferstadt, Germany.  The grant funds we have received during these lean times will most certainly help us to be ready when it is appropriate for us to once again actively promote Frederick's German culture and heritage. 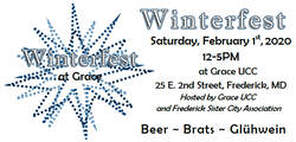 February 1, noon – 5:00 p.m.: Winterfest at Grace United Church of Christ
​The FSCA and ​Grace United Church of Christ collaborated on this event held at the church edifice. Themed like Fasching or Mardi Gras, the festivities included a performance of German songs by local group Frederick Stimmung. FSCA provided our famous Glühwein and Warsteiner Bier, and Grace United provided Würsts, Rotkohl (red cabbage), and donuts. Altogether, an enjoyable afternoon for all attendees! 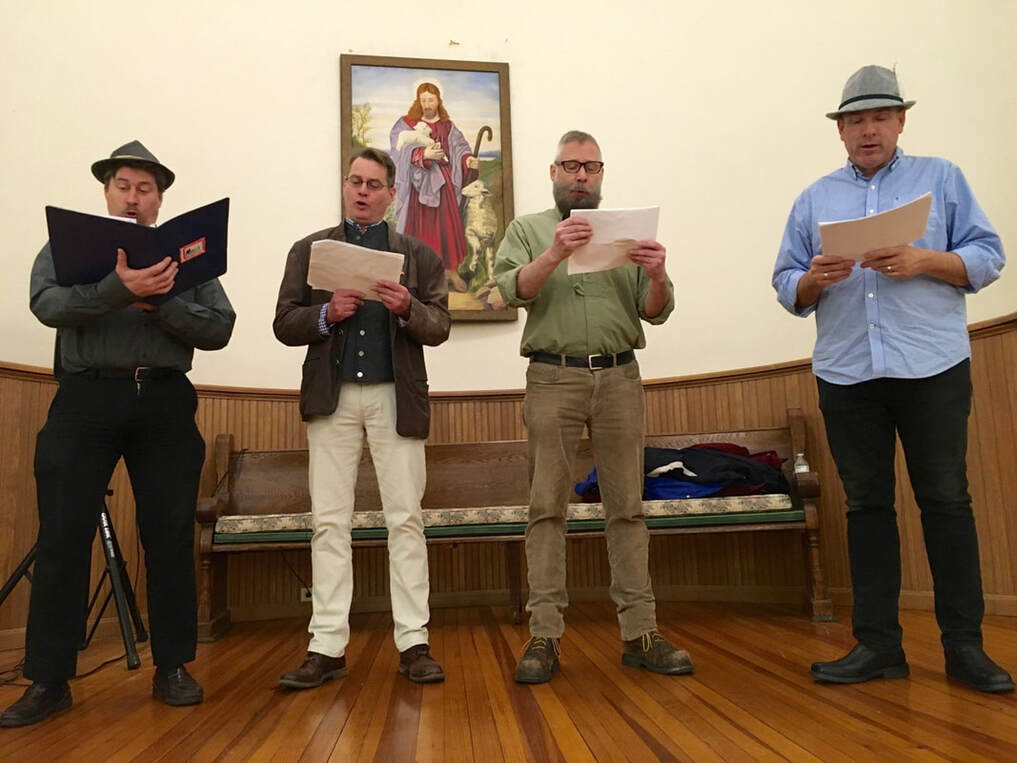 A Festive Luncheon to Celebrate an Active, Successful Year
On December 15, FSCA members gathered together at the local Manalu Italian Restaurant to enjoy each other’s company and celebrate our many successful activities this past year, which you may read about by scrolling down this page.

Enjoying a gemütlich celebration of the year’s successes are (from left) Rosemary Orthmann, George Albrecht, Regina Schwab, Brian Guenther, Rick Peters, FSCA President Steven “Fritz” Buckingham, Ruth Heflin, Ronnie Osterman, Ken Poisson, and Sybille Faucette.
We also had an information table at the C. Burr Artz Public Library.  A new venue for this event this year, the library table was an unstaffed spot where we could publicize the FSCA via printed materials, including our new rack card, that interested passersby could take along with them.
Oktoberfest at Schifferstadt Architectural Museum
We once again participated in the Schifferstadt Architectural Museum’s annual Oktoberfest, held this year on October 19 and 20. Saturday was a beautiful day, with lots of foot traffic past our new booth location next to the herb garden. We answered many questions about our Sister Cities, handed out all of our newly minted rack cards, and sold a fair number of German-related items. Sunday, however, the weather was unfriendly, and we struck the tent early. Many thanks to all the volunteers who helped make this a successful event!! 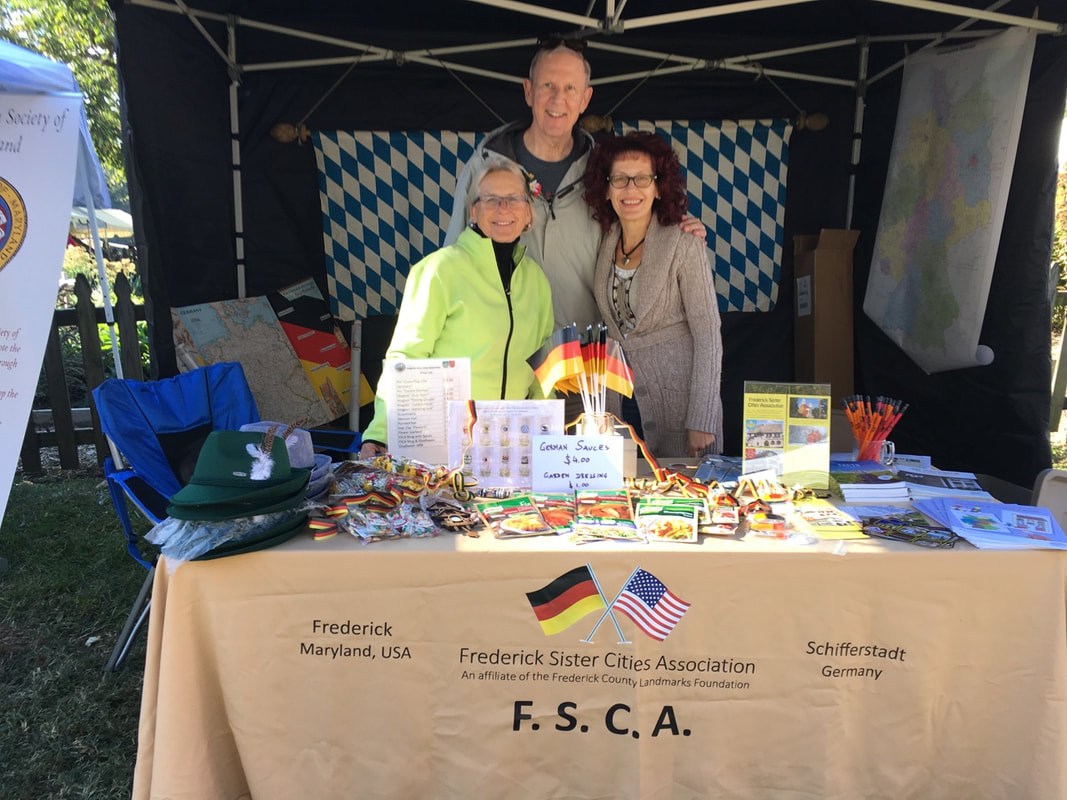 From left, FSCA members Regina Schwab, George Albrecht, and Sybille Faucette were on hand to greet the many passersby on Saturday.
Frederick’s Oktoberfest, September 27 & 28
This year, FSCA members participated in the Oktoberfest’s opening keg-tapping ceremony on Friday evening and co-hosted a German Spelling Bee on Saturday (with Heritage Frederick). 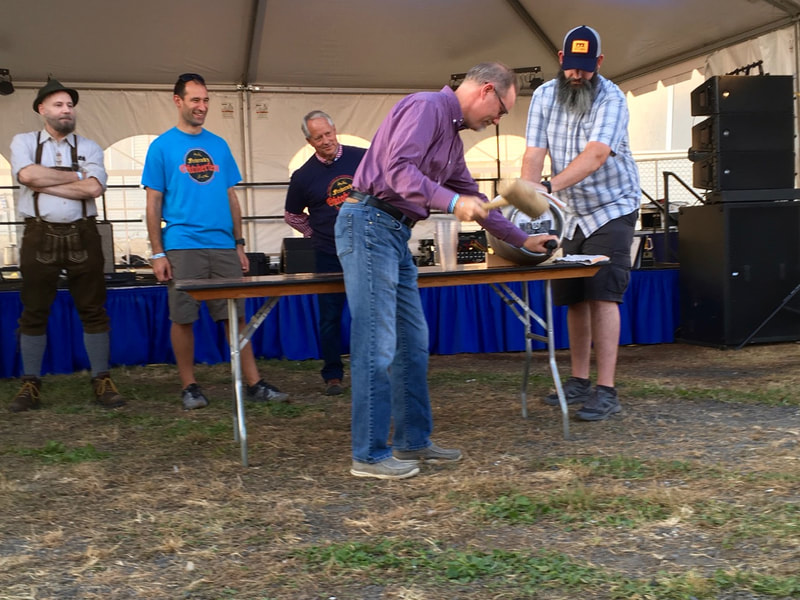 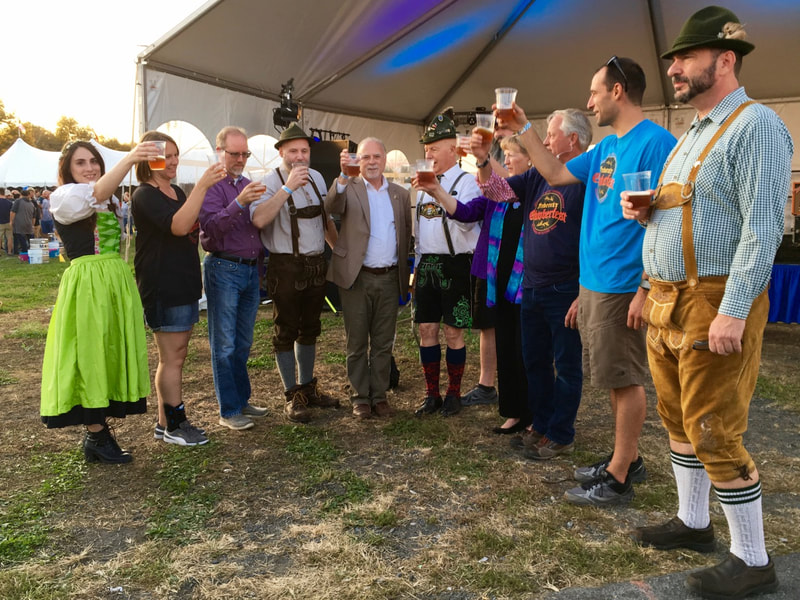 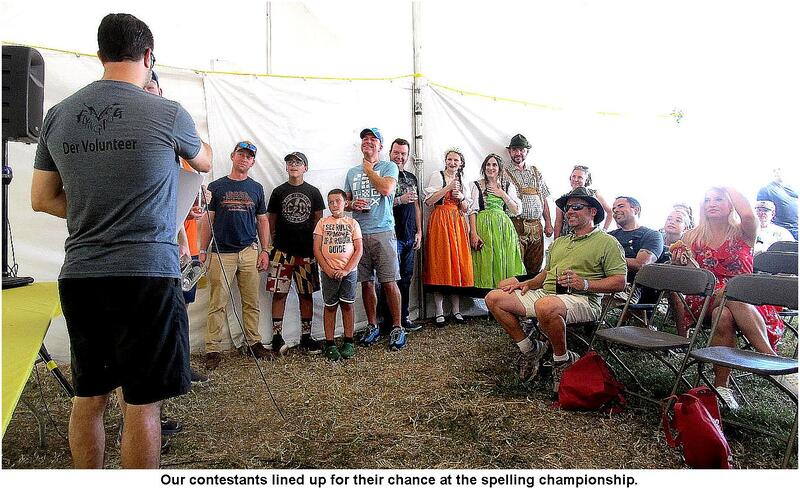 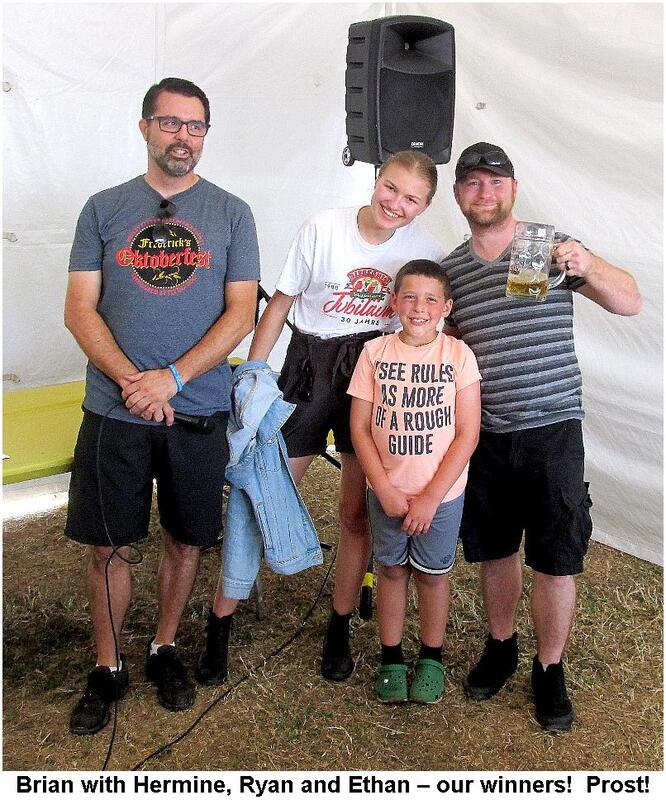 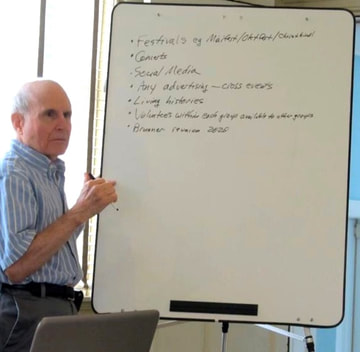 FSCA VP Rick Peters captures ideas during the Kraftung’s brainstorming session.
First Frederick German “Kraftung”
Convened by the FSCA, representatives from several local community organizations that engage in activities related to Germany met on Saturday, June 15, at Heritage Frederick. The purpose of this 2-hour Kraftung was twofold:
Attendees included representatives from the FSCA, Frederick County Landmarks, Heritage Frederick, Visit Frederick, Grace United Church of Christ, Evangelical Reformed United Church of Christ, and various guests. Alderman Roger Wilson stopped by briefly to show his support and to inform us that the city of Frederick would be celebrating the 275th anniversary of its charter in 2020 and hopes to partner with us in several events.

Based on the success of this first meeting, the FSCA hopes to make the Kraftung  an annual workshop.

(Thanks go to Baltimore Coffee & Tea for donating the coffee that kept us alert and up-to-speed!)​ 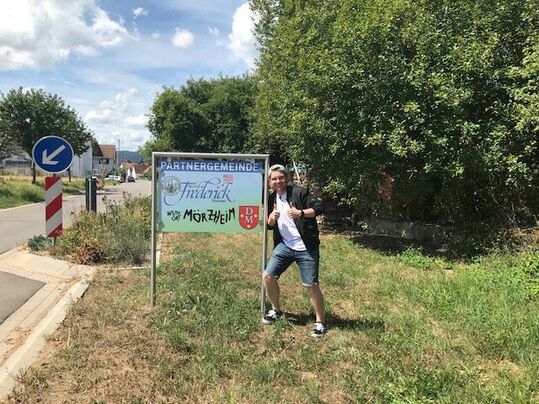 With his host family in Mörzheim, Zachary toured many famous sites, including the Old French Gate and scenic mountains. He visited with Ortvorsteherin Dorothea Mueller and was invited to add words to the Mörzheim “Golden Book.”

Zachary spent his second week in Schifferstadt, where he was able to join the city’s 1,150th anniversary celebration.

"While I was there the biggest things that I loved was the language, talking to the people...seeing how...although we speak a completely different language we're very the same at heart,” said Klug.
Click here for Interview 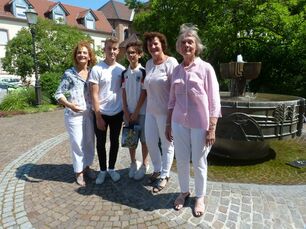 Schifferstadt gets more visitors from Frederick
July 6, 2018. During Sebastian Buckingham's summer vacation at his grandmother’s house in Germany, he did not miss visiting Frederick's sister city Schifferstadt. Mayor Ilona Volk met him and made sure he enjoyed his time in Schifferstadt while staying with the Imo family. Frederick's strong ties to our sister cities should encourage every traveler visiting Germany to pay a quick stop to receive a warm welcome. 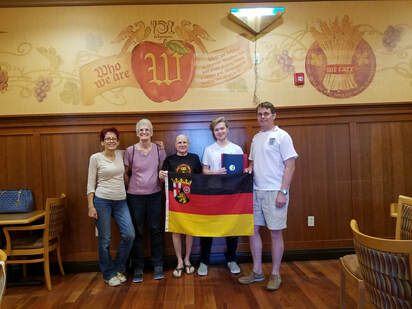 FSCA 2018 travel grant recipient announced
APRIL 30, 2018: The FSCA is pleased to announce that Thomas Johnson High School senior Zachary Klug is the recipient of this year’s travel grant to visit Frederick’s two sister cities, Schifferstadt and Mörzheim, this July/August. Congratulations, Zachary! And thank you to the other applicants; we encourage you to apply again the next time.

The FSCA grant will cover the cost of Zachary’s round-trip airfare to Germany. The FSCA will also provide contact with host families for a stay of five days in each city. Zachary will spend his first week in Mörzheim, then travel to Schifferstadt for the second week. 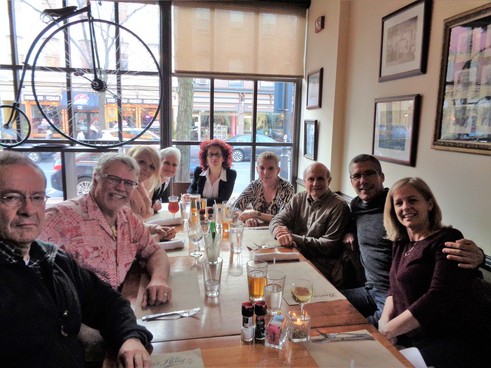 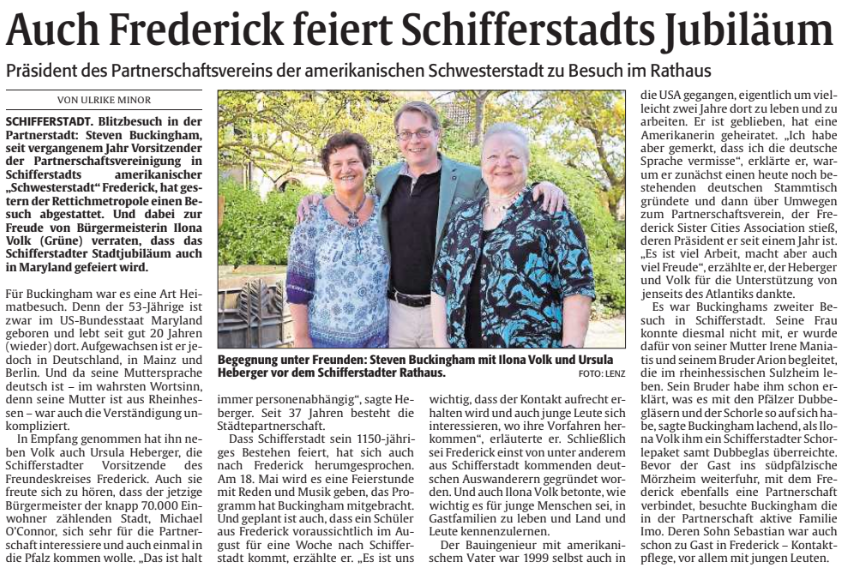 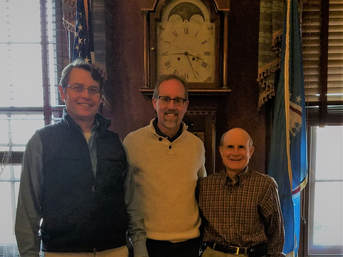